Anton Shudder was the owner of The Midnight Hotel and a member of the Dead Men.

He was in the group called The Dead Men during The War, along with Skulduggery Pleasant, Ghastly Bespoke, Erskine Ravel, Dexter Vex, Saracen Rue, Larrikin and Hopeless. He was very serious about the missions, and the other Dead Men only saw him smile once while on a mission when Larrikin gave him a "birthday cake".

Before meeting up with rest of the Dead Men he was with Saracen Rue whom he had to save from a battalion of enemy forces. While he did this Saracen tripped down a hill while charging the enemy single-handedly.

At the corpse attack in Denmark, Shudder saved his fellow mages by unleashing his gist on Lord Vile.

In 1861 Shudder along with the dead men chases Serpine in the wild west.

Across a Dark Plain

He and the dead men are on the hunt for Nefarian Serpine in the wild west. He then goes into a bar and questions the barkeep. The barkeep then tells them to head for the Church. When they get there zombies come out of the ground, ready to attack them. They retreat to the church, Ravel and Ghastly put a wall of air between them and the zombies while Shudder releases his gist and kills them all. Then they find the Necromancer Noche and Shudder gets him to talk. They see Serpine running to the temple but Solomon Wreath and his Necromancers stopped them.

Anton was first seen at The Midnight Hotel where he listened to, although didn't quite believe, Skulduggery's warnings about someone trying to release the Remnants. Billy-Ray Sanguine checked in, and when Skulduggery threatened to beat him up, Shudder informed him of his rule that prevents guests from being harmed.

He then kept a close watch of Sanguine as the assassin spoke with Valkyrie and Skulduggery in the Hotel's common room, making sure that he wouldn't be harmed while under the Hotel's protection.

Later on, when the Zombie Horde attacked, the three, including Valkyrie Cain, Mr. Jib and Miss Nuncio defended themselves against the Zombies. Shudder managed to defeat a whole room by himself, but a lot was taken out of him. Because of this, Sanguine managed to steal the key to the Remnants and took one using the Soul Catcher. Shudder then found out the truth about Vanguard's death but promised to keep it a secret.

Throughout the rest of the book, he helped the gang out and was present at Croke Park Stadium. He also allowed Caelan to stay at his hotel, with the condition that he would lock his room at sunset, and not open it until sunrise. 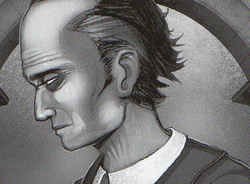 Shudder goes out of the hotel to get supplies and furniture (since Caelen destroyed his room after his kiss with Valkyrie). The Remnant that possessed Finbar Wrong possesses Shudder. He, along with Wreath and Deuce attack Skulduggery, Ravel and Ghastly.

He then shows up with the Remnants at the Roarhaven Sanctuary and attacks Tesseract, who breaks his arm, which makes the Leader Remnant leave him and possess Tesseract instead. Another Remnant then possesses Shudder.

He is later seen at The Hibernian where he still possessed. When he is at MacGillycuddy's Reeks, the Remnant is ripped out of him by the Receptacle (a giant Soul Catcher made to catch Remnants in another outbreak in the early 1800's) and he turns back to normal.

Kingdom Of The Wicked

An alternate Shudder is found in Mevolent's dimension as China Sorrows bodyguard, presumably because most people seem to be afraid to go up against his Gist. He first appears when Skulduggery and Valkyrie pay a visit to China to retrieve the Sceptre. Just as they are about to enter, Shudder steps in the way but then China lets them in. He is later seen fighting Baron Vengeous but he easily defeats him as he snaps his neck.

As things led up to war Anton was targeted as one of the first to be taken out, so a group of Supreme Council mages rents every room in his hotel, twenty-three in all. When the war actually broke out, the twenty-three mages ambushed Shudder. Shudder, however, managed to realize what was going on before the attacker had time to fire his gun, he killed the first gunman and used his attackers own gun to kill several others who were in sight. When the rest of the mages showed themselves and prepared to fire, Shudder touched a sigil on the wall and all the guns were disabled and useless. So the attackers turned to melee combat, Shudder though still managed to beat most of them before they brought in Metric, a Supreme Council sorcerer. Shudder, using an enemies fallen sword, Shudder attacked Metric, but Metric's magic made it impossible to cut his skin, so when Metric moved to attack Shudder stabbed him in the eye and Metric died. Shudder returned to facing the other enemies but Regis jumped down from the railing and attacked Shudder by surprise. Shudder moved out the way just in time and Regis's knife only hit his shoulder. Shudder moved away and was hit in the side by and blast of energy. So, now on the retreat, Shudder used a secret exit and escaped his hotel.

Anton teams up with the rest of the Dead Men in The War of the Sanctuaries. He fought inthe Battle at the Abandoned Fort and The Battle of Arizona. He is later betrayed and killed, along with Ghastly Bespoke by their former friend and Dead Man, Erskine Ravel.

Shudder died in the sanctuary, by the Cleavers under Ravel's command. The Cleavers struck in the weak points in Shudder's armored clothing and then decapitated him. The Gist tried to fight back but dissipated when Shudder finally died.

Although Ghastly did previously mention that users of Gists have powerful souls, it is impossible for Shudder to live on through his Gist, as it died alongside Shudder. Skulduggery also mentioned that the only way to stop a Gist is by attacking its user. Simply, the Gist cannot live without Shudder and Shudder was killed.

The Dying Of The Light

In Necropolis Shudder's ghost appears to Skulduggery but we later find out it was only a trick.

Serpine mentions that after killing China, Shudder was the only one who could become the leader of the Resistance, but Serpine killed him as well in order to gain the position.

The only known entrance (there are speculations of hidden entrances, as China knows the usefulness of secret exits) to Roarhaven City is at Shudder Gate, named after him after his death.

Anton was good natured and friendly and ran the Midnight Hotel. This is a place for outcasts and occasionally, criminals. He also had no problem with allowing Caelan a room in his hotel. In his hotel, there is only one rule. You cannot harm another guest. If someone does, no matter who is at fault, Anton will fight on behalf of the person who was seen as the victim. Following on from that it is said that he is put on "bodyguard duty" a few times throughout his life. This puts across that he is protective and that is further proven by his willingness to protect his friends. It is mentioned that he scares people, this is presumably due to his rare ability.

Anton is an extremely powerful Adept, and his power is rare. He is able to let his "Gist" out of his body. A Gist is someone's determination, hatred and rage infused into a demonic and evil-looking creature that is released through one's chest. They start off as hazy and slightly ghost-like but then they start to become more corporeal and look exactly like the person who is releasing the Gist but has black eyes, a large number of pointed teeth, clawed hands and is more rugged. If a Gist is outside a person for too long, the Gist will become a real thing and the real person is reduced to something who lives inside it.

Ghastly mentions that "powerful souls can become Gists" indicating that in order to have a Gist, you also have an extraordinarily powerful soul.

Shudder is also an excellent hand-to-hand combatant, as seen when he easily defeats Baron Vengeous and takes on twenty three mages sent by the Supreme Council, without using magic. As well as combat skills he has displayed raw physical strength, easily breaking Vengeous' neck and killing a mage by punching him in the throat. Shudder wields a sword and wears armored clothing (likely made by Ghastly) during the war between Sanctuaries.

Retrieved from "https://skulduggery.fandom.com/wiki/Anton_Shudder?oldid=37194"
Community content is available under CC-BY-SA unless otherwise noted.