Derek Landy is the author of the Skulduggery Pleasant series.

He confirmed at Booktopia that he will have a cameo role in the future. His true name may appear. [1] He later claimed that he has already appeared in the series [2] although he has kept a secret about what that character is and has no intention of revealing it. "It may be big or small, maybe an important character".

Derek Landy was born in 1974 in Lusk, County Dublin, Ireland. He went to art college but left after a year. He has written two screenplays that have been made into films. The IFTA award winner Dead bodies and a IFTA nominee Boy Eats Girl. (In a biography he refers to them as "a zombie movie and a slasher thriller where everybody gets killed")

He himself was nominated for an IFTA for Best Script.

He currently lives on the edge of Dublin with his many cats and dogs.

Nothing much is to be found about Derek Landy's history as his autobiographies are very vague (In most of them he writes "The reason Derek writes his own biographical blurb is so he can finally refer to himself in third person without looking pompous or insane". He also mentions that for the earlier part of his life, he was raised by foxes. But presumably, this is not true). He said that he, prior to writing the Skulduggery Pleasant series, foiled a giggling maniac's citywide crime spree, wrestled a grizzly bear, and found the lost city of gold, also saying that he promptly lost the lost city of gold, because he was unable to remember which big tree it was next to.

He attended Drogheda Grammar School and that he is also a black belt in kenpo karate. (In an autobiography he wrote that "he has taught countless children how to defend themselves in the hopes of building his own private munchkin army".) 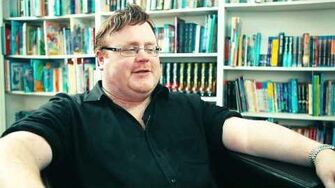 Many other videos can be found at HarperCollins Children's Books

Retrieved from "https://skulduggery.fandom.com/wiki/Derek_Landy?oldid=38557"
Community content is available under CC-BY-SA unless otherwise noted.