When she had the energy, when she was standing, she simply raised her fists."

— Abyssinia to Valkyrie Cain during Bedlam.

The 12th explosive novel in the internationally bestselling Skulduggery Pleasant series, BEDLAM will blow your mind – and change everything…

On a desperate journey to recover her sister's lost soul, Valkyrie Cain goes up against the High Sanctuary itself, and there's nothing Skulduggery Pleasant can do to stop her. With Abyssinia's grand plan about to kick off in a night of magic, terror, and bloodshed, it falls to Omen Darkly to save the lives of thousands of innocent people.

And as the madness unfolds around him, as hidden enemies step into the light, and as Valkyrie is sucked into a desperate, lawless quest of her own, he has no choice but to become the hero he never really wanted to be ― or die in the attempt.

Skulduggery Pleasant: Bedlam begins with Valkyrie Cain and Skulduggery Pleasant following a lead regarding Dr Nye's location. They meet up and converse with Christopher Reign; owner of a local Roarhaven bar and distributor of a new magical item known as Splash. Originally created by Nye, the Splash is a sigil carved onto a piece of paper that gives the user a jolt of magic, just enough to feel good. As the discussion begins to get heated Christopher calls on one of his door staff, Panthea, in an attempt to have them thrown out. Valkyrie initially tries to goad Panthea into a fight but ends up flirting with her instead. Skulduggery presses Christopher for an answer only for him to insist he really doesn't know the whereabouts of Dr Nye. They decide to leave the bar but not before Valkyrie knocks out a patron she describes as getting too handsy with the staff.

They leave the bar and notice a City Guard car parked in the next street over in front of a small shop with its door kicked in. They investigate only to find three city guards, Sergeant Yonder, Officer Lush and Officer Rattan trashing the place. After a brief discussion, it's revealed that this shop belongs to mortals from the Leibniz Universe. It's implied that the owners had not paid the city guard protection money and as such were being targeted till they do so. The trio of guards tries to leave only for Skulduggery to stop them and declare that they are under arrest causing all three to turn hostile. After a brief scuffle Lush, Rattan and Yonder are defeated. Cuffed and helpless Yonder declares his animosity towards the duo before being presumably taken away.

Over at Corrival Academy, Omen Darkly is in a meeting with Ms Gnosis in her office, discussing his future choice of discipline. Omen appears to be indecisive and unsure of what future discipline he wants to specialise in. Miss Gnosis attempts to ease his anxiety. She states that he doesn't have to be to hard on himself as he still has a number of years before he experiences The Surge. Omen and Miss Gnosis briefly discuss Sensitives and how twins like Auger and Omen have a strong psychic connection before Miss Gnosis lets him off early. Omen, now free to leave, manages to get to his next class just before the bell rings. Class starts and Never comes in looking exhausted. The two discuss her recent adventures with Auger and his group. Never expresses how she struggles to balance her life of adventure with her school work. She compares her lazy work ethic to Auger who is seemingly always on top of his homework even after constant adventuring. She attempts to copy off Omen only for Omen to state that he doesn't complete his homework either. Never appears to be slightly annoyed and demands to know why, only for Omen to state "I was thinking about other things". Miss Chou walks in and begins class by asking Never a question regarding her homework.

Razzia is applying makeup in the ladies room of Coldheart Prison next to Abyssinia. Razzia appears to be lost in her thoughts as Abyssinia speaks to her, presumably unaware that Razzia is not listening. Razzia ruminates on her past back in Australia. She admits it gets quite hazy as she thinks back to her father who she seems to be unsure she even had. On one hand, she has vague memories of a "a nasty old man quick with his fists" but expresses her dislike at those memories instead substituting them for memories of a more lovable father. Razzia realises Abyssinia has still been talking this whole time, but is completely lost as to what they were just discussing. Razzia goes back to applying her makeup and thinking to herself. Knowing Abyssinia, she assumes that she has been talking about her son, Caisson, the entire time. Razzia inwardly expresses happiness at Abyssinia getting Caisson back but appears to be at odds with him now being viewed as the weirdest one in the group. She admits though that anyone having to endure what Caisson had just endured for a near century would come out at the very least, a little odd. It's for this reason that Razzia looks up to Caisson torturer Serafina admirably. She secretly wishes to meet the mysterious wife of Mevolent and perhaps learn a thing or two. Abyssinia interrupts Razzia thoughts asking for her opinion on something. Razzia defects the question by instead asking Abyssinia what she thinks. Abyssinia believes that they should move to the next stage of her plan but at the same is concerned and unsure of what to do about Auger Darkly. Razzia doesn't see what the problem is. The Darkly Prophecy is still more than 2 years away. Plenty of time in Razzias mind to find an opportunity to kill him. She explains her thoughts to Abyssinia in a paradoxical way ending with her expressing her views on the whole concept of prophecy as a complicated yet deceptively simple business. Abyssinia disagrees and Razzia concedes the argument, admitting that her opinion may be invalid due to her being crazy.

Valkyrie surprises her mother when entering the house, with her saying that Valkyrie has "secret ninja training." Melissa tells Valkyrie that her dad is grumpy.

On Twitter, a few days out from Bedlam's release, Derek had Tweeted about 'still writing on a book!' While some fans theorized that Bedlam hadn't been finished yet, others theorized that Derek had already started to write a sequel. Derek later said in a tweet a few hours after the one above, that Bedlam was indeed finished, but did not elaborate if the book he was talking about was indeed a sequel to Bedlam or a new series entirely, nor did he divulge the book's title. 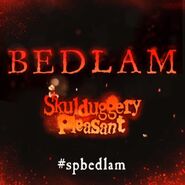 Teaser for the Bedlam white cover coming April 2nd.
Add an image to this gallery

Retrieved from "https://skulduggery.fandom.com/wiki/Skulduggery_Pleasant:_Bedlam?oldid=37044"
Community content is available under CC-BY-SA unless otherwise noted.