"I'd give a speech," China said, "but I'm late for another speech I have to give about something I don't care about. Kill Mevolent for me, my Dead Men, and save the world. That's all."
— China Sorrows to the new Dead Men during Seasons of War.

"The thirteenth thrilling novel in the internationally bestselling Skulduggery Pleasant series, SEASONS OF WAR will test the Skeleton Detective and Valkyrie like never before…

War is coming. To avert catastrophe, Skulduggery and Valkyrie are sent on a secret mission that takes them away from everything they know, to a forsaken land of magic and grim, unrelenting terror.

It is here that Valkyrie will have to fight the hardest — not only against the enemies who want her dead, but also against her own self-destructive impulses.

The book starts with Valkyrie talking to Kes about Alice and Valkyrie maybe traumatising her. Kes reassures her that it's going to be okay.

Valkyrie Cain is seen in a dark dungeon with red candles, maybe a dozen of them. She is being held hostage by Victoria Leigh and Jason Randal, presumably sacrificing her to Satan. They wait until midnight and their Master, or the Dark Lord, which Valkyrie mistakes for Voldemort, and the Master says that he's seen her before. She tells him that if he saw a picture of her destroying the world, it wasn't her, it was a god who looked like her. Valkyrie then proceeds to kick the hell out of the actors and the master, with the help of Skulduggery Pleasant, dressed in rags to disguise as one among many of the other skeletons lining the halls. Victoria asks if Valkyrie's one of the sorcerers, and she hits her in the face even when Victoria asked not to.

Omen Darkly visits Jenan Ispolin in prison after trying to kill Auger and Omen. He states that he did stab Omen, but Auger's injury was much worse, and he was still in hospital. While talking with Jenan, he tries to hit him but he ends up falling off his chair while Omen just sat there. Omen's parents want Jenan to be executed and killed for attacking Auger.

Valkyrie sets her phone to a timer of sixty seconds and opens the music box. She closes it a bit late then remembers that it is Fergus's birthday and she has to visit her family. They talk and Beryl arrives, but she has a change of heart and she apologises for the way she treated her family who she was younger. Even Valkyrie hugs her.

Skulduggery is wearing a black three-piece suit, with a black shirt, red tie, black hat with a black hatband, pulled low over one eye socket. He has his gloved hands in his pockets and his polished shoes crossed over one other, waiting for Valkyrie. When she arrives, Skulduggery tells her they've been receiving letters from their mysterious friend, warning if an imminent invasion by Mevolent from the Leibniz Universe. Valkyrie realises that it's Nefarian Serpine from the alternate world. He says that he left the Resistance without a leader and mingled with the mortals so he could get into Roarhaven City. Serpine tells Skulduggery and Valkyrie that Mevolent wants them both dead and he wants to kill them himself. Mevolent said he'd invade their dimension just to kill them both. Serpine says that there's a sickness in their world, and he'd heard reports before he went to Roarhaven. Before he'd left, they'd lost entire continents to the disease. After telling Valkyrie and Skulduggery all this, he says he wants to have a house and be a Roarhaven Citizen. He says that he wants a puppy, and they're delicious. Valkyrie then asks Skulduggery if she should hit him or he will.

Sebastian Tao is with his team of The Darquesse Society to discuss Darquesse. Bennet Troth then says that if Sebastian found her, which makes him the First Apostle(s) of Darquesse. He then reveals his name to the others as Sebastian Tao. They chat about Darquesse and states that she'll be protecting them, hopefully. Then Forby says that the last time Darquesse was here, she tried to murder the entire planet. Lily calls him a blasphemer, but it was true. they say they've been trying to talk to her, but all she's been doing is staring at the wall. Sebastian tries, but Darquesse ignores him.

Valkyrie and Fletcher Renn meet up and go to the roof of the Flatiron Building. They teleport there and Valkyrie gets surprised by Tanith Low. Fletcher proceeds to ask Tanith out, which he is then rejected because Tanith is seeing Oberon Guile.

Martin Flanery is in his office. He is thinking about killing Crepuscular Vies. He then appears behind him and they have a brief convesation. It ends with Martin thinking that when Crepuscular was giving one of his condescending little speeches, a man wearing black gloves would shoot him in the back of the head, and Martin would watch.

Meanwhile, Sebastian goes into the room with Darquesse again. There she makes the first movement in three months by exhaling. Sebastian tries to convince Darquesse to help them, but it ends with Darquesse vanishing.

To be continued, please add to this! 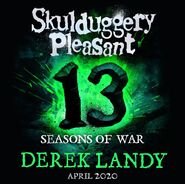 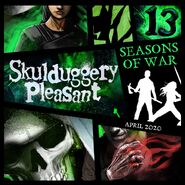 Seasons of War teaser shared by Derek on Twitter.

Add an image to this gallery

Retrieved from "https://skulduggery.fandom.com/wiki/Skulduggery_Pleasant:_Seasons_of_War?oldid=37917"
Community content is available under CC-BY-SA unless otherwise noted.