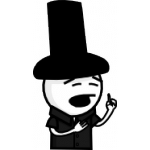 hey, since you seem to have become our css guru, do you think you could change the bar colors for polls, so that we can actually see the number of votes for it as well? perhaps a nice medium dark blue. anyway, thanks! Kingbirdy 19:27, May 14, 2011 (UTC)

We. Can. Still. Get. Spotlight.

Definitely block that anon, caused we just got vandalised. D:

I use the default one... whatever the new one is called. Just on here though. &dash;

Today I'm getting it as it's my first chance since my return from my holiday, so I'll be avoiding Skulduggery related sites for a bit in case of spoilers. I think I might have ruined the twist for myself :( Blogman12 11:03, September 3, 2011 (UTC)

You can use my bot, if you like. I'll give the password the next time we're both on the chat. --

Hey man. Do have the MediaWiki coding to remove the "Add a Page" and "Files on this wiki" buttons handy? --

How did you make "Fanon:" a custom namespace? --

Fletcher Renn#Appearances. What. The. Fruitcake. --

Uh, no, I made a new section... And I don't know. There's no open tags. There's nothing wrong with the template. --

Actually, I asked Wikia Staff about it and they said it was a coding error and they fixed it. Sorry I didn't tell you. :S --

Yeah. Damn cache won't clear. If you see the error, it seems the only solution to make the solution work is edit the page. Silly Wikia. --

Are you getting the Database error? Yeah, me too. I could ask Kiiyashi on MSN, but I'm too lazy to sign in. :P --

Did you get the email from Kiiyashi and Liliana about contacting Gen on her Twitter? She's the only one who can access the error and fix it. Moving from wikia is both a good and bad idea. So many ups and downs. :\ --

o.0 I agree with you completely. And I suppose those are our biggest problems. Perhaps we could get Kii to come online and discuss what moving would mean in terms of the affiliation? Or you could jump onto MSN and talk to him there.
It seems all the users hate the forums. Kii included. Although a move does sound good, the feedback about the forums does not... What's your call? --

So you're saying you prefer Roarhaven.net over the Skulduggery Forums? Just because of the off-site wiki? And I'd much say we're better off with the Skul. Forums, as they may become official in the future, which is always good. --—Resident Devil 23:17, December 6, 2011 (UTC)

Hello, I'm an Admin from the Professor Layton Wiki so my signature's not going to work. Damn.

Anyway, may I ask something? The wiki is fabulous, and I will join full-term once I've read the whole series (I'm halfway through The Faceless Ones), but I have a request. Please can you have a spoiler template like my wiki does? I'm not trying to make my wiki seem superior or be demanding or anything, but I'd like to read the articles and be able to skip spoilers. Is there anything that could be done?{{SUBST:Template:SophiaDescole13}} 20:43, February 16, 2012 (UTC)

Do you mean literally on/off, or skip? I know how the [show/hide] works, as I had to improvise a little when making a table for cutscenes that could be hidden, and figured out how. I could probably look at our spoiler template for skipping.{{SUBST:Template:SophiaDescole13}} 22:07, February 16, 2012 (UTC)

The button at the top is a good idea, but I know what you mean. We tried something like that, and decided to put it off, even though we could do with a spoiler hider.{{SUBST:Template:SophiaDescole13}} 22:16, February 16, 2012 (UTC)

Oh yes, I see what you mean. We'd have to cover up all of our games' plots on nearly all our pages (even our minor character ones, as I stupidly decided to add spoilerous plot to them), and also have to do the same for the infoboxes. It's awful, as I tried to code it according to colour (black for the first game spoilers, red for the second, etc.), and it was unbelievably garish. I might have to steal it too and discuss. Show/hide could work, but it's such a faff around to implement, and then there's work on trying to make the opening quotes and introduction and such spoiler free.{{SUBST:Template:SophiaDescole13}} 22:37, February 16, 2012 (UTC)

Definately; it's a shame that Wikipedia haven't have made a proper template to deal with spoiling content, as they created the need for one. Oh, depends; the colour coding was a few months back, show/hiding YouTube tags was a couple of weeks ago.{{SUBST:Template:SophiaDescole13}} 22:56, February 16, 2012 (UTC)

Because of what I'm used to, what are the general guidelines of editing? Like when it comes to links and italic names and such? Oh, and I've fixed my signature.Sophia (Skulpedia talk, Layton Wiki talk) 11:06, February 17, 2012 (UTC)

There was a bonus story called "Just Another Friday Night" that featured them. --

Hey! Manga I was wondering what was the story with the featured page?To the well-organized mind, death is but the next great adventure 10:59, March 24, 2012 (UTC)

This wiki is about the series of SP, not fan-made fiction. There are two pages that I feel are unnecessary in this wiki, and I would appreciate it if you would delete them. To find them type in:

Bad to the Bone

Thankyou for your time, and I hope that these pages are relocated or removed

I have yet again found another page I feel should be deleted:

The Crown of Shadows

Thankyou for your time

Thanks very much, have a good day

Manual of Style + other stuff

How does this look? I don't know if we want book names for the headings, like on Valkyrie Cain, or event headings, like on Ghastly Bespoke. Either way, I think I've nailed the layout for character pages, if you don't see anything wrong with it.

And just look at this wondrous template here. --

That's the point. The biography is their details, not just they're history and role in books.
Apart from that, what do you think of the headings beyond "In Books"? --

I thought the separation looked nice. But if you're against it. Other than that, it's all good? With event titles for headings under "In Books" instead of the book names? --

Dude, we both agreed to the friggin' blocking policy. You could at least follow it, rather than just blocking everyone you deem fit. —Resident Devil 09:28, March 2, 2013 (UTC)

Retrieved from "https://skulduggery.fandom.com/wiki/User_talk:Manga_Maniac?oldid=21671"
Community content is available under CC-BY-SA unless otherwise noted.